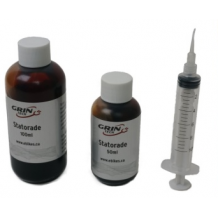 There are 10ml, 50ml, 100ml, QS could help customer to inject statorade for better service.

We did some test for verification, and it turns out to increase 250% last time of power. In China, we could try to get Ferrofluid in Taobao, but it volatilize very soon in 2 days. The statorade could last in motor above 2 years, so we suggest to test it if you suffer from overheat issue. For QSMOTOR 205 50H V3 hub motor, 10ml will be ok.

10mL Syringe of Statorade ferrofluid for use in cooling direct drive hub motors, with convenient Luer Lock plastic nozzle for injecting into holes as small as 2mm diameter. Approximately 5mL of this fluid injected into a hub motor will more than double the ease of heat flow from the stator of your motor to the motor shell without any noticeable increase in motor drag.

Bulk 50mL bottle Statorade ferrofluid for use in cooling direct drive hub motors. Approximately 5mL of this fluid injected into a hub motor will more than double the ease of heat flow from the stator of your motor to the motor shell without any noticeable increase in motor drag.

Bulk 100mL bottle Statorade ferrofluid for use in cooling direct drive hub motors.Approximately 5mL of this fluid injected into a hub motor will more than double the ease of heat flow from the stator of your motor to the motor shell without any noticeable increase in motor drag.

How it WorksHow Well Does It Work?How Much to Use?Deployment and AvailabilityFrequently Asked Questions:BackgroundWhere to Order

Statorade is a line of low viscosity magnetically suspended motor cooling fluids that is being jointly developed by Grin Tech, a pioneer in ebike R&D, and Ferrotech, the inventor and undisputed leader of Ferrofluid science since the 1960’s.

The idea behind Statorade is brilliant and simple. A direct drive hub motor generates heat internally at the stator, but this heat has no easy path to escape since it is surrounded by trapped air. It is possible to cool the motor with vent holes and active airflow from outside, but this exposes the motor to the elements. Alternately, filling the motor with oil will cool the stator windings quite well, but with significant increase in motor resistance from fluid drag and an enormous sealing challenge to keep the oil from leaking

With Statorade, only a tiny amount of fluid is needed to achieve the same effect. Nanomagnetic particles suspended in a low-viscosity oil concentrate this liquid in the magnetic air gap of the motor. That is exactly where it needs to be to transfer heat through fluid convection between the motor stator to the motor shell, where the heat can then be easily shed to the environment via passing airflow.

The magnets on the rotor trap the fluid in the gap so that it can’t splash around and leak out through the ball bearings or cable wiring as happens with normal attempts at oil cooling. And it turns out that only a tiny amount of Statorade fluid is needed to achieve heat transfer, resulting in negligible effect on the rolling drag of the motor.

How Well Does It Work?

The short answer is very well, on average roughly doubling the thermal conductivity from the copper windings to the outside environment. That is similar to the cooling performance improvement achieved by drilling very large vent holes on both side cover plates, but without any of the exposure consequences. At low speed Statorade does a slightly better job, while at high speeds the active air flow has an edge.

In the graph on the left, you can see the effects of adding Statorade to the TDCM 5 Speed IGH hub motor in 1mL increments. By the time we get to 6mL of Statorade added to the motor, the thermal conductivity from the copper to the motor shell has increased from 1.8 to 4.3 Watts/Deg, and the steady state motor core temperature has reduced from nearly 90 °C to less than 60 °C.

What does this mean in practice? Well, if you can double the amount of heat that a motor can dissipate, it means (due to the I2R relationship) you can run it at roughly 40% higher sustained torque and power without overheating. 40%! In practice, what this means is that bike rides that used to push your hub motor to 100+°C will now only result in ~70°C temperatures. And when the motor does get hot from a short intense power burst, then it be that much faster at cooling down and being ready for the next thrust of high power.

Of course, with a given motor controller and battery setup the motor isn’t going to feel any different once you add Statorade, off the line torque and everything will be exactly the same. It’s only when you are monitoring the motor temperatures that you truly see and appreciate the effect, and can expand your usage window accordingly.

We’ve created a very powerful ebike simulation tool that takes all of the firsthand data from our wind tunnel experiments and modeled a full hub motor and ebike environment around it. You can then directly compare any given trip simulation for a motor with and without Statorade addition and see for yourself how the core temperatures are reduced.

How Much to Use?

One of the most fascinating aspects of Statorade is just how little is required to achieve these thermal benefits. With conventional oil cooling of a hub motor people would typically add several hundred mL of ATF oil or similar in order to get good thermal linkage which results in measurable extra drag from fluid friction. With Statorade, we start to see measurable improvements in heat dissipation with just 2-3 mL, and on most hub motors the full effect is reached with somewhere between 4-7 mL. If more Statorade is added beyond this, then there is almost no change in the heat flow but you will get increasing viscous fluid drag. In the graph below, you can see the effects of adding Statorade 1mL at a time on a large 40mm wide MXUS direct drive hub motor.

If you aren't sure of the ideal fill amount for your hub, then we recommend measuring the no-load current draw of your motor at full throttle, then adding the Statorade in small increments at a time until you start to see a measurable increase in the unloaded current. This is the point where additional Statorade will mostly increase your rolling drag without adding much thermal benefit.

Our goal was to have all direct drive motors supplied by Grin include Statorade by the end of 2016 and we have succeeded on this front. We started off with it in the TDCM internal geared hubs at the start of the year and shortly after introduced it in the 9C+ motor series. In late summer all of our new Crystalyte motors were Statorade compatible as well, with silicone sealant on the motor side plates and a through-hole inside one of the disk bolt holes for injecting the Statorade.And finally, the Grin All-Axle hub motor which started the pursuit for better motor cooling is sealed and has a Statorade injection port on one of the axle holes.

We also offer stand alone 10mL syringes of Statorade to anyone who wants to experiment with adding it to their existing direct drive hub motor, as well as 50mL and 100mL bottles for those using it in larger quantities.  The 10mL syringes are also available directly via Amazon for US customers. We have an OEM program for any motor manufacturers who want to purchase and consume it in volume.

Will this work in geared hub motors or mid-drive motor systems?
Is this compatible with all direct drive motors
Will this magnetic properties affect the motor speed or torque by allowing more flux through the air gap?

This discovery and research into ferrofluids for motor cooling resulted from our in depth thermal studies of hub motors, much of which is documented on the endless-sphere topic "Definitive Tests on the Heating and Cooling of Hub Motors" . We started this thread in early 2013 in order to characterize hub motor thermal behaviors, both to make a more accurate simulator model and to quantify the effects of air vent and oil cooling mods both of which were popular with hot-rodders at the time.

The thread is fairly lengthy but a good read. Some of the more interesting posts are: